Any Daredevils Heading To Sturgis?

If You’re a Daredevil, the Legendary Buffalo Chip is the Place to be during this years Sturgis Motorcycle Rally: Russ Brown Motorcycle Lawyers 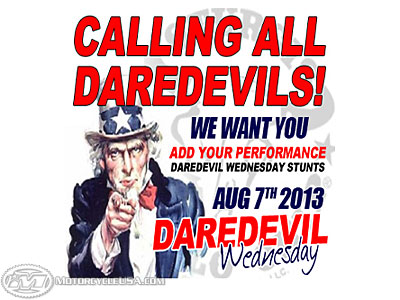 The Sturgis Buffalo Chip Campground is gearing up for a hair-raising rally event unlike any we’ve ever seen before. Daredevil Wednesday is set to begin on August 7, 2013 at the CrossRoads at the Buffalo Chip’s free public access area. A Calling all Daredevils contest is set to take place there and daredevil motorcyclists from across the country can submit their own stunts to be selected. In fact, multiple stunts are already being planned in an attempt to set a World Record!
Guinness Book of World Records officiates will be there to record the event and the attempts at breaking multiple motorcycle world records. On their schedule: Toby Baker and Clint Ewing will rival head to head through the Longest Motorcycle Ride through a Tunnel of Fire; and stuntman Patch McGillicutty will be there as well to set a world record of over 91 miles per hour inside a Wall of Death on his motorcycle.  In addition, the American National UniMotorcycle Society UniMotorcycle Drag Races will attempt to bring home the one-of-a-kind one-wheeled motorcycle drag speed title.
This incredible hair-raising day is a gearing up to be one of the best days at the Sturgis Motorcycle Rally. With media from around the world, Guinness Book of World Record officials, and thousands of our motorcycle brothers and sisters, Daredevil Wednesday promises to be a “can’t miss” event. Individuals seeking to have their stunt considered to be part of Daredevil Wednesday need to submit their information to the Buffalo Chip before July 7th.
Evel Knievel Rocket Cycle Jump
Daredevil “Mad Mike” Hughes will attempt a world record at this year’s Sturgis Motorcycle Rally. “Mad Mike” will jump his steam powered rocket cycle as far and high as the infamous Evel Knievel once attempted. Hughes hopes that his rocket will hit 275 mph and propel him over 1000 feet high for ¼ of a mile. If he clears this distance he would be a World Record holder. His jump will take place on Tuesday, August 6th and will be televised. If he makes it, he will attempt a Snake River Canyon Jump in 2014.

Russ Brown Motorcycle Attorneys will be at the Sturgis Buffalo Chip and we are thrilled to be able to attend Daredevil Wednesday! We are also excited to be in Sturgis, South Dakota for the rally and to ride with our fellow motorcyclists and introduce more bikers to BAM, our free roadside and legal assistance program. Come stop by our booth at the Sturgis Buffalo Chip or at the CrossRoads or on Main St in Sturgis to  learn more about BAM or visit us on the web at russbrown.com. You can also call us toll-free at 1-800-4-BIKERS.
Russ Brown Motorcycle Attorneys
We Ride—We Care—We Win!