Brenda Fox Heading to Sturgis To Ride With Biker Belles 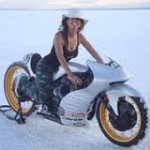 Brenda Fox has just been announced as one of the special guests to attend the Sturgis Biker Belles Ride – taking place during the motorcycle rally this August.  As a stunt precision driver and professional motorcycle rider, Brenda Fox has been the unseen face in many television shows, TV commercials, and film productions. With motorcycle racing being a household staple from before she could walk, and having grown up with the sounds of Don Vesco and Roger DeCoaster talking motorcycles in the family garage, author/ ambassador/ advocate/ speaker Brenda Fox was destined to embody the motorcycling life –  full speed ahead.

In addition to miles in the saddle riding motorcycles on TV and film, Brenda Fox has a background in Score Off Road Racing and has trained with the best of the best including Freddie Spencer Riding School.

In the male dominated niche of custom motorcycles, Brenda broke through gender barriers and earned the highly regarded position of Custom Motorcycle Consultant for Robb Report Motorcycling, where her expertise was employed in selecting some of the finest machines in the world to be featured in the luxury publications and elite media opportunities. Brenda has been continually featured in numerous motorcycle publications, and she has also crossed over into the mainstream media realm.

Brenda Fox embraces all styles of motorcycles and has been featured riding a Ducati on the Speed Channel as well as custom choppers on American Thunder. Sharing her love of “all things motorcycle”, Brenda has over 230 thousand motorcyclists following her on her social media sites.  She garners the largest women’s motorcycle social media following in the U.S., and quite possibly the world. As stated by famed producer and custom bike and car builder George Barris, “Brenda Fox is one of the best! A skilled and accomplished rider who can be trusted to handle the diversity of bikes needed for film production.  She can place a bike on set exactly where needed consistently. It has been a pleasure to work with her thru the years – she’s one of the best in the business.”

Brenda’s determination is also diamond-hard.   She’s been fighting breast cancer and several other life-threatening conditions for several years, Her Facebook page urges others to perseverance and hope:  “You never know how strong you are, until being strong is the only choice you have.”

Come meet Brenda at the Sturgis Buffalo Chip’s® Annual Biker Belles™ celebration for a day of real women, real stories and real fun while helping to raise funds for two great South Dakota charities.  The event and ride take place on Wednesday August 8th, 2012 during the Sturgis rally.  100% of all rider contributions go directly to the charities.  To learn more please visit www.bikerbelles.com or call 605-347-9000. 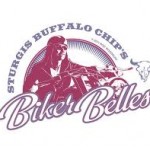