It’s a big year for the motorcycling world’s most iconic brand.  Celebrating their 110th anniversary, Harley-Davidson began the campaign for a yearlong celebration of freedom, adventure and self-expression.  HD has numerous celebrations and events planned but the most unique one is the “Freedom Jacket”.

From humble beginnings as a simple black leather Harley riding jacket, this jacket has become a symbol.  A symbol of what it means to ride Harley-Davidson.

It all began when Harley-Davidson’s CMO Mark-Hans Richer wore the jacket during his ride through China.  While he was stopping for a rest in a small town, he asked a local to paint something on his jacket that would symbolize the spirit of Harley-Davidson. The man painted the Chinese symbol for ‘freedom.’ Thus, the Freedom Jacket was born.  Since that fateful day, the freedom jacket has been worn by numerous riders who have passed through the highways of Rio De Janerio, Mexico, and the Austrian Alps, to name a few. In the coming months the Harley-Davidson Freedom Jacket is scheduled to visit India, Rome, Australia and other locations on it’s journey with the final destination being Milwaukee Wisconsin for Harley-Davidson’s 110 Anniversary Celebration. 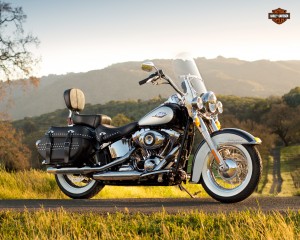 The 110 Anniversary Celebration in Milwaukee is sure to be a party of epic proportions – Harley-Davidson just announced their partnership with Kid Rock which will wrap up with a concert in Milwaukee for the anniversary celebration.  This is just the beginning – many more announcements about the Labor Day weekend celebration to come.