I was camping in the deep woods in British Columbia when I got a phone call from Harley Davidson asking if I wanted to ride with their media crew from Toronto, Ontario to Milwaukee for the 115th Anniversary Celebration of Harley Davidson. I had already heard of the event and knew it was going to be big, so obviously I said “hell ya.”

Next thing I knew, I was on a plane heading across Canada to pick up my 2019 CVO Street Glide Special at the Harley Davidson Canadian Head Quarters. I was met with 4 other media heads from around the country, we were handed our keys and we headed out on our 500 mile journey across Ontario, the US Boarder, through Michigan and across a 2.5 hour ferry into Wisconsin. 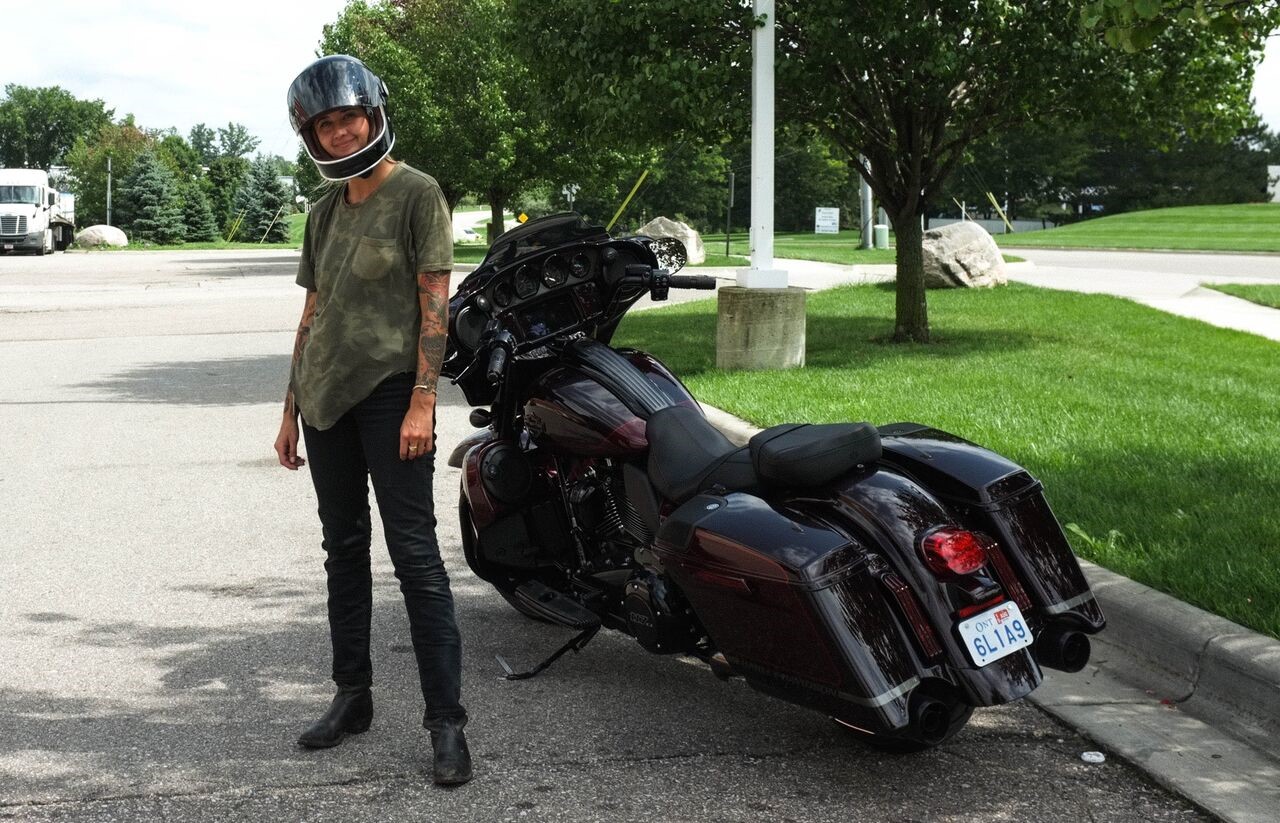 Me and my “Big Mama” CVO Street Glide Special

Milwaukee was nuts. The entire city was the venue for the 115th anniversary celebration. Every street had a stage with bands playing, there was a bar tent set up on every corner, the streets were over taken by bikes and the city was buzzing. I have never seen so many bikes in my life. The event was just beginning and for the next 5 days, we had an itinerary so jam packed, I didn’t even know when I was going to sleep. 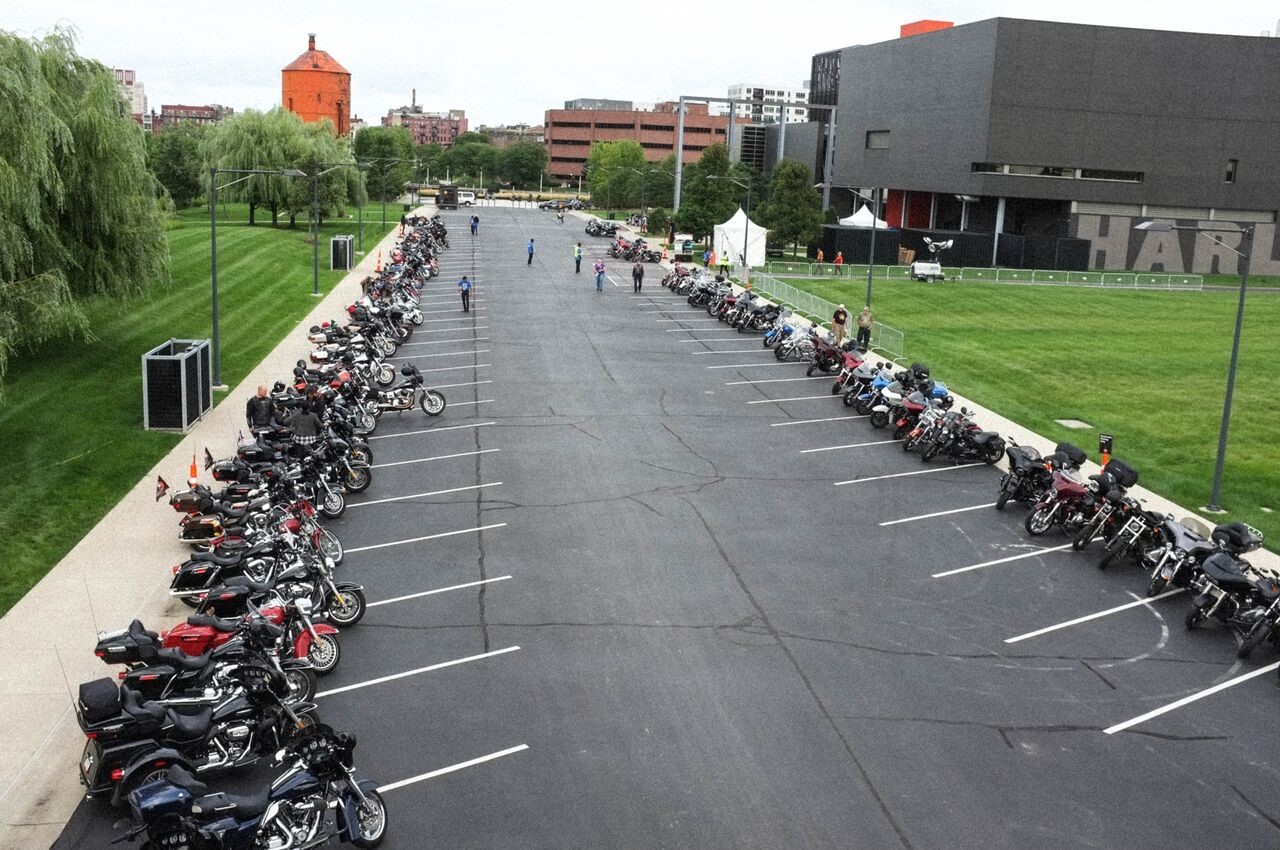 Our first full day in the city included a visit to the Harley Davidson Global Headquarters. The location of HQ is the same location that Harley Davidson was founded in a tiny wooden shed 115 year ago. That shed, that originally sat across the street from where I was standing that morning, was where “Serial #1” was built – the first ever known Harley which now sits in the Harley museum just down the street. Within 10 minutes, I was introduced to the great-grandchildren of the founders of Harley and was standing in the home of so much history that moulded the culture of what motorcycling is today. 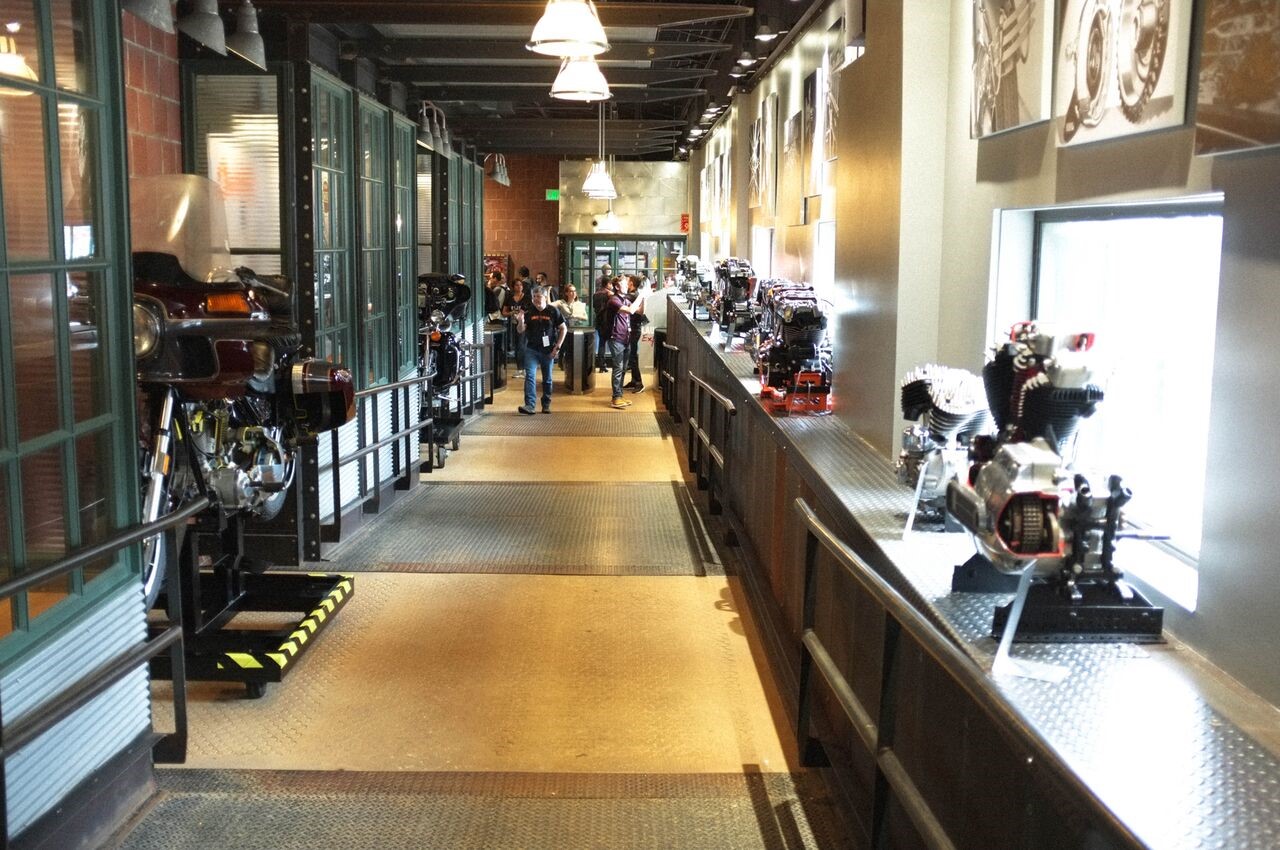 Inside the front doors of the Harley Davidson headquarters 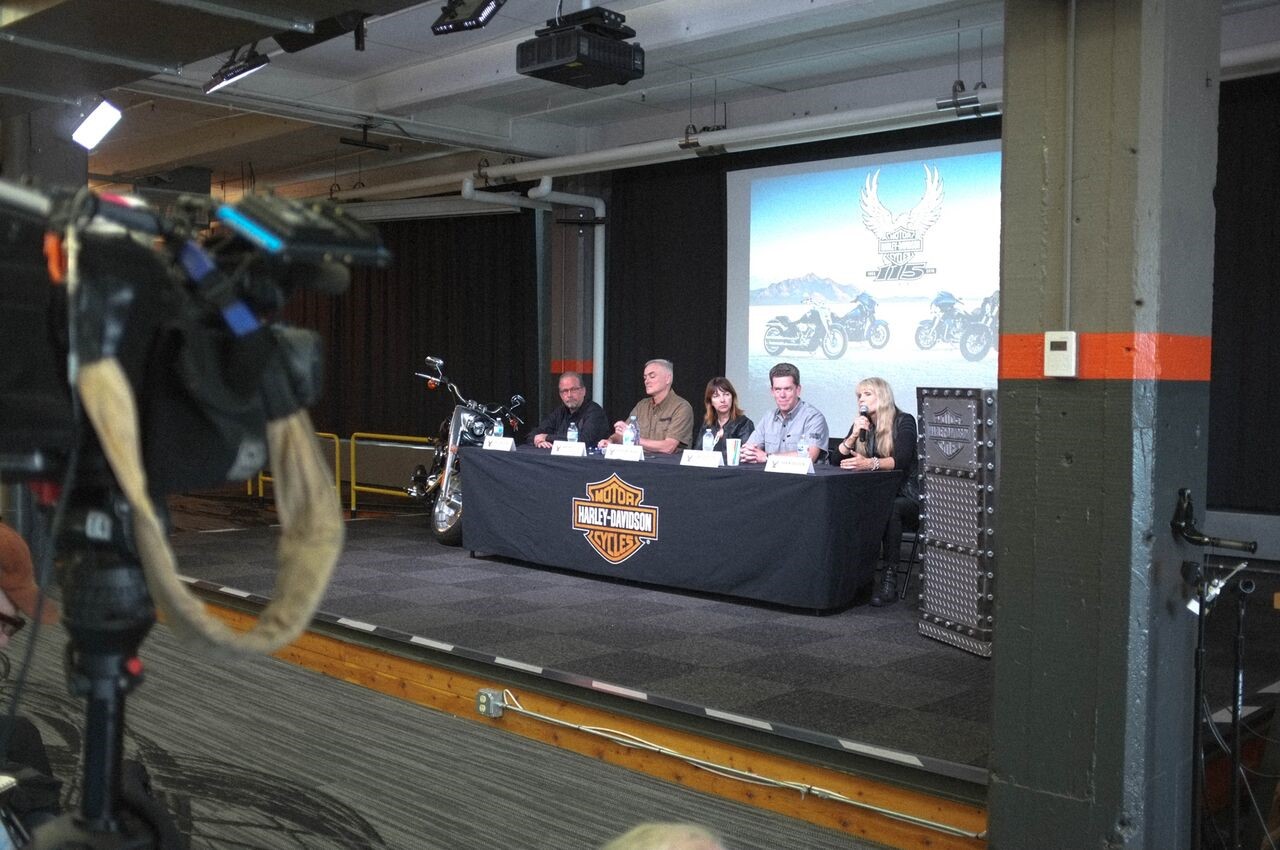 The panel at the media briefing held at the Harley HQ. Bill Davidson and Karen Davidson, Great-Grandchildren of the founders of Harley Davidson sit on either side of the table. 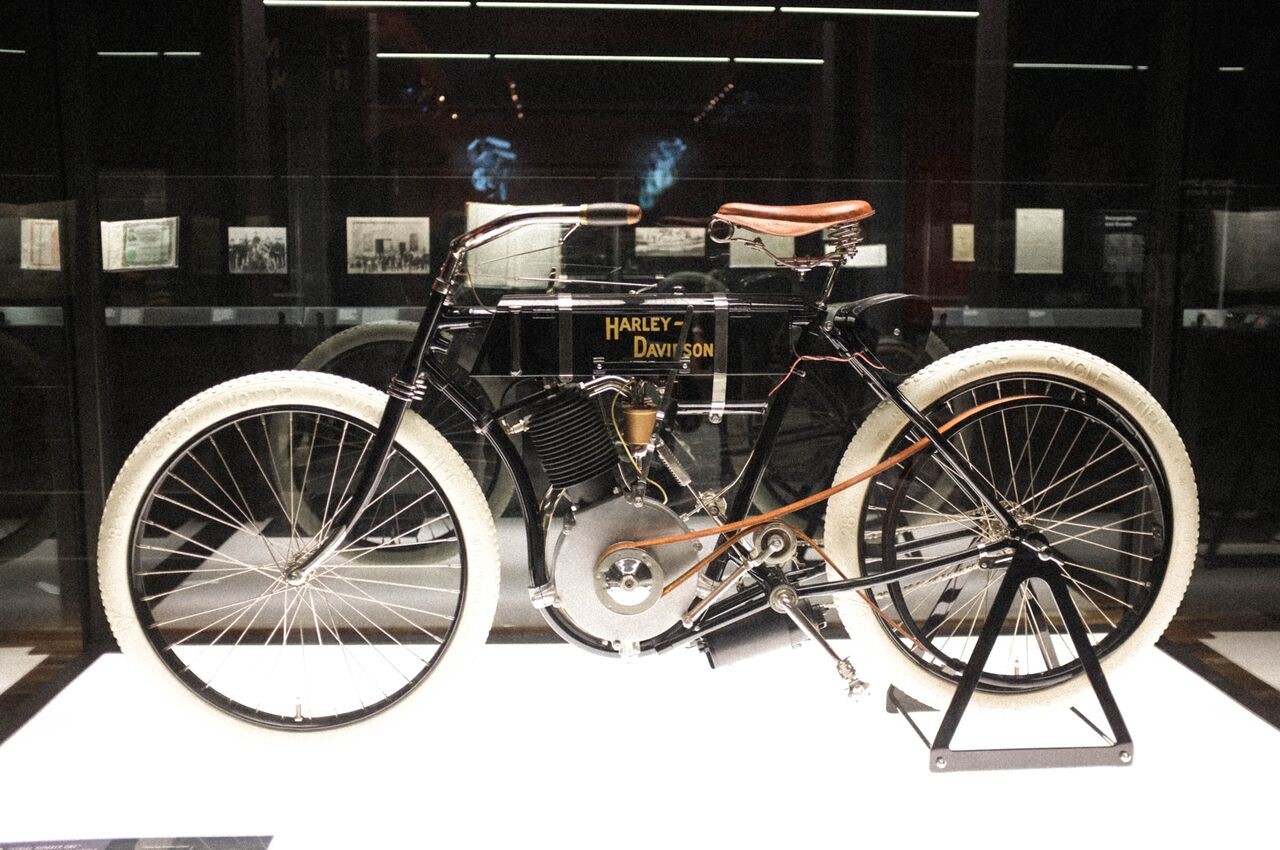 From there, we toured the city. We visited the Harley Museum where the entire grounds were covered in bikers, bikes, stages, bars and music. There was no shortage of things to see and people to meet. There was a HOG Members meet up here on this day as well and we saw patches from everywhere – Mexico, Guatemala, Texas, California and even some from over seas. The brother/sisterhood of HOG (Harley Owners Group) was strong this week. There were so many HOG patches, meet ups, and even tattoos in every corner of the event, you couldn’t turn around without seeing a HOG member and their crew. 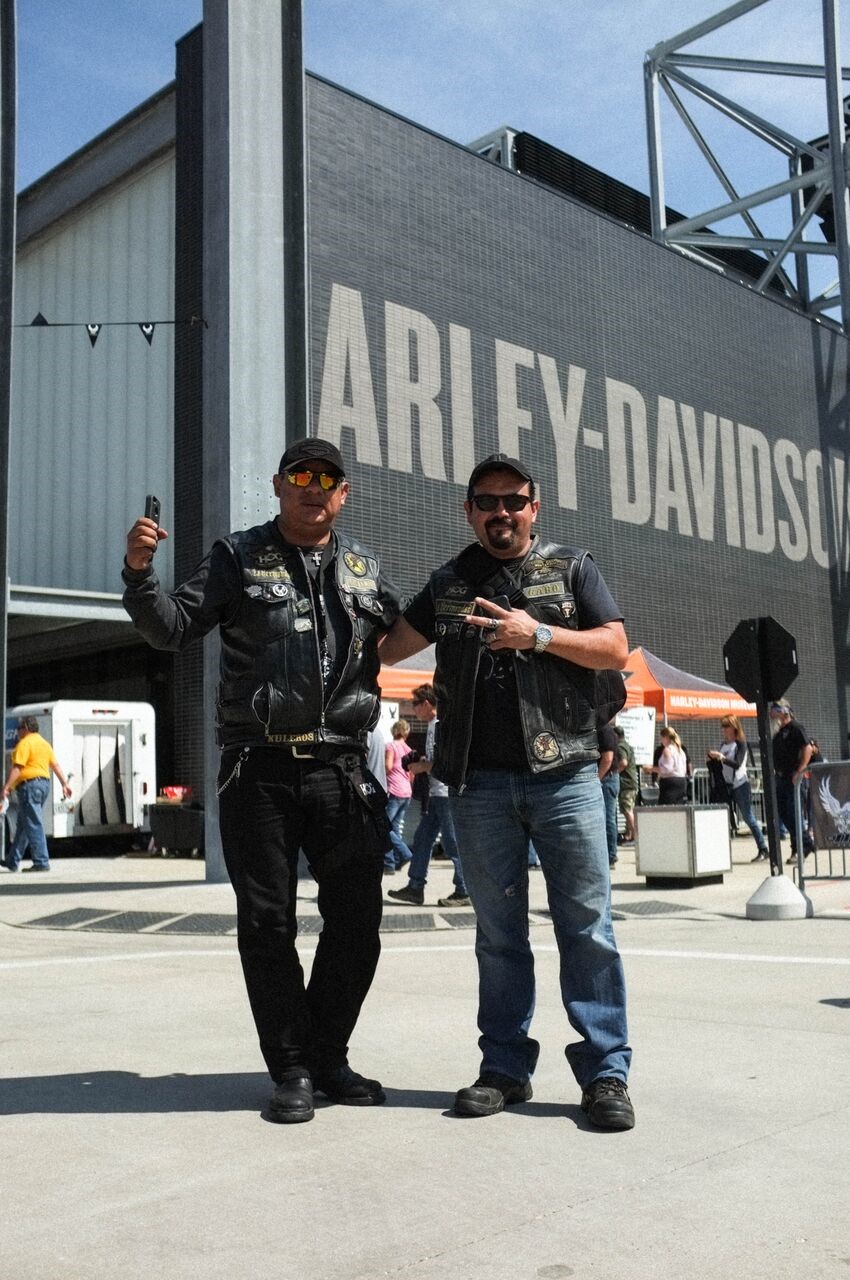 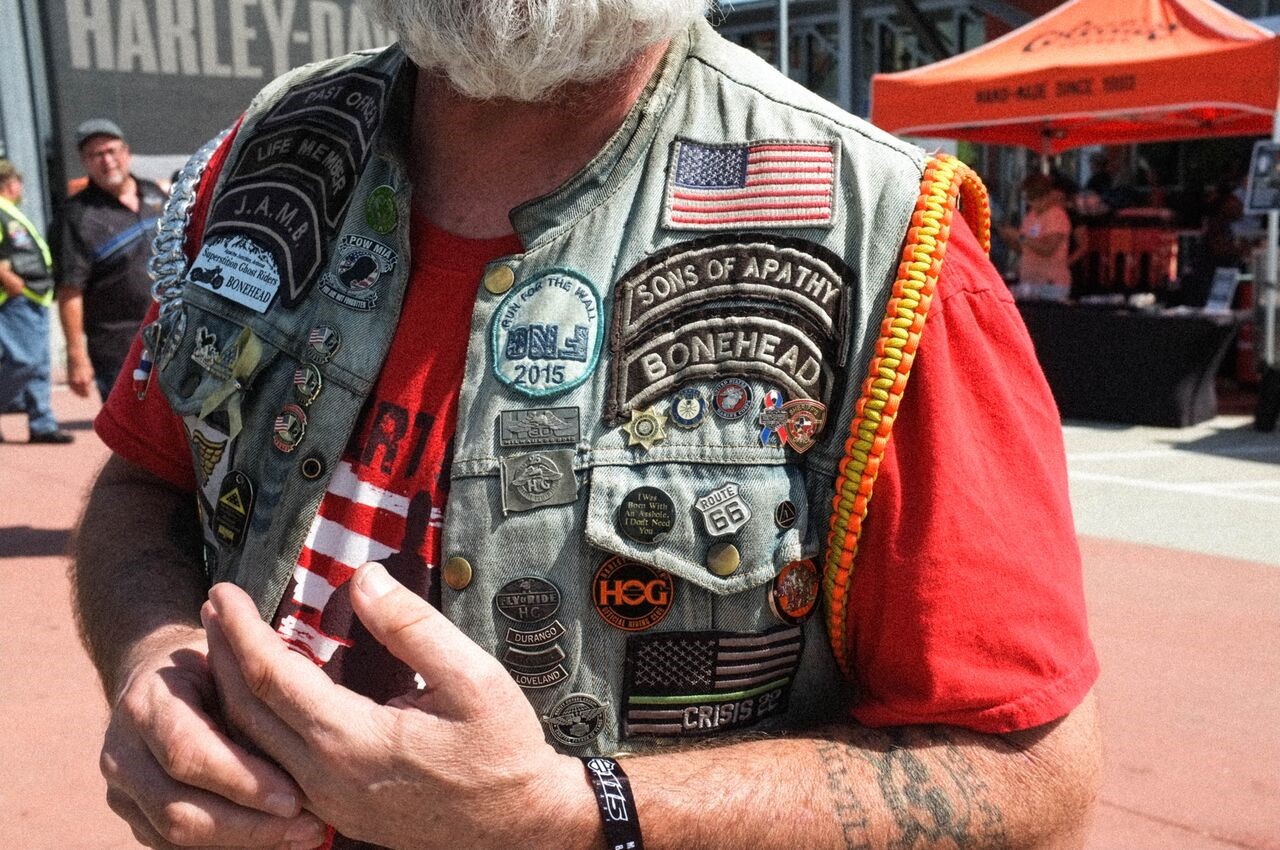 You meet the best people at these things The Harley Owners Group is a sponsored community marketing club, operated by Harley Davidson for enthusiasts of HD/ There are more than a million members.

The next couple days involved us attending every single event that the 115th Anniversary offered. We went to the Drag Racing, Flat Out Friday, the Hill Climbs, The factory tours, the street parties, the Moto Carnival, and even The Race Of Gentlemen that happened right on the beach on the edge of town.

My favourite, by far, was The Race of Gentlemen. “TROG” is a vintage motorcycle race on the beach which is normally an annual event that happens in New Jersey. Our media passes got us right into the pits where old Flat Heads and Knuckleheads were being pushed around and worked on in between races. We were so close that the sand would get kicked up into our faces at take-off. Every outfit, bike, nut and bolt is period correct at this race – it’s a mind-boggling experience to see it happen in real life. You forget what century you’re in, especially if you’re drinking the margaritas that the bar offers just a couple feet outside of the pits… those Milwaukee margs’ will get ya’. 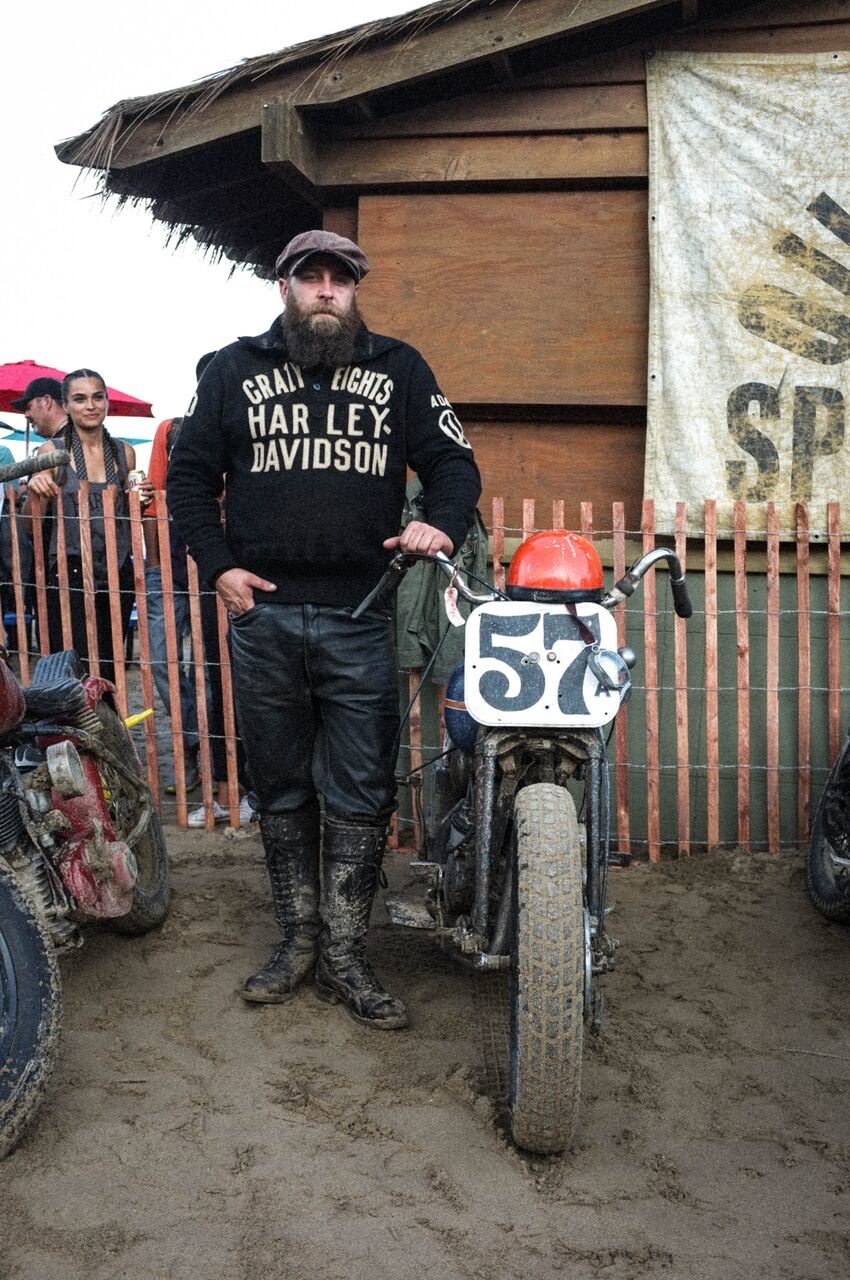 A racer and his bike at The Race 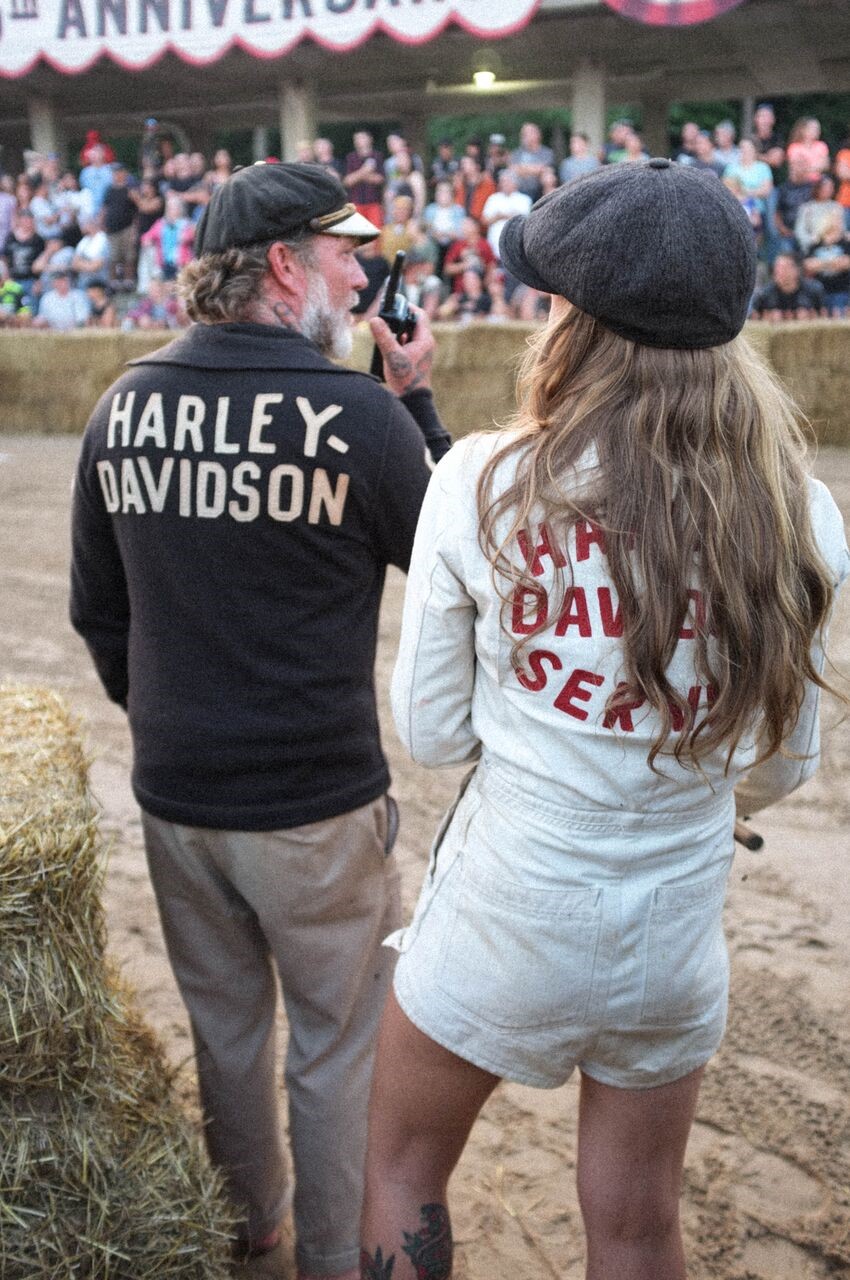 Racers getting ready to go on the beach at “TROG” The media team from Harley Canada and Willie Davidson, the Grandson of Bill Davidson, Found of Harley Davidson

Another favourite was the hill climbs. The event took place at Little Switzerland which is a ski hill in the winter time. The hill climb took place right on the main run of the resort. It was a rainy, muddy day. At first the rain bummed us out, but when the races begun and the mud and dirt was flying everywhere, bikes were flying all over the place and the riders were head to toe mud, we realised that this was going to be entertaining as hell. I was battling a Milwaukee margarita hang over so I got onto the chair lift and let it take me around and around over the races all morning long. It was the best seat in the house and that fresh mountain air really helped me out as I watched rider after rider test their luck on a slippery, muddy, bumpy course that scared the crap out of me even just to watch. 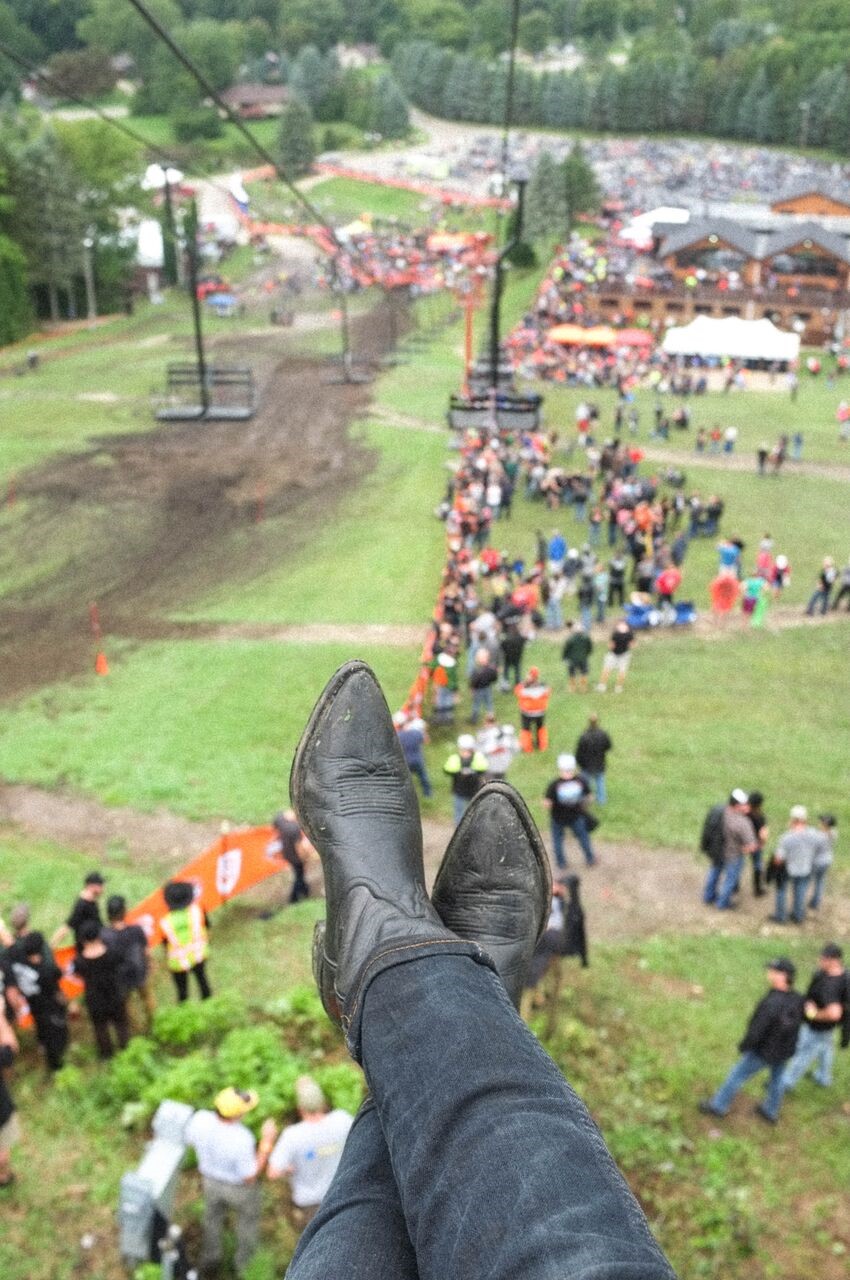 My hangover zone at the Hill Races This guy put and 80’s Ironhead engine into an enduro body and tried to race it up the mud hill. Tried is the key word. 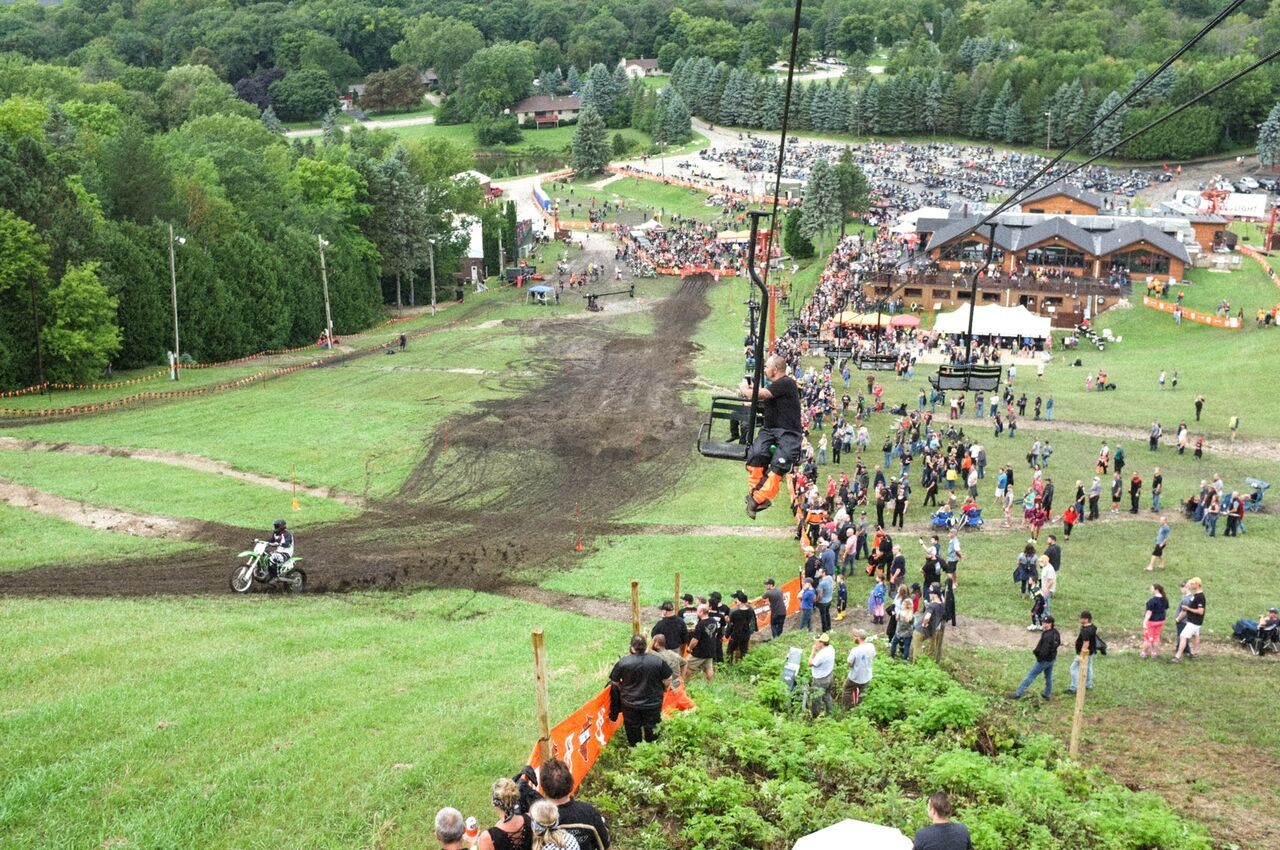 The Hill climbs at Little Switzerland

After the races we visited Sobelman’s, a famous Bloody Mary spot in the Midwest. The menu is full of crazy Bloody Mary’s that are topped with bacon cheese balls, mini burgers, shrimp, sausage and even a skewered chicken if you’re feeling really crazy. We really got the entire Milwaukee experience on this trip and after 5 days in the city, attending every event we possibly could, seeing every concert, and going to every “must-go-to” bar and restaurant, we were toast. 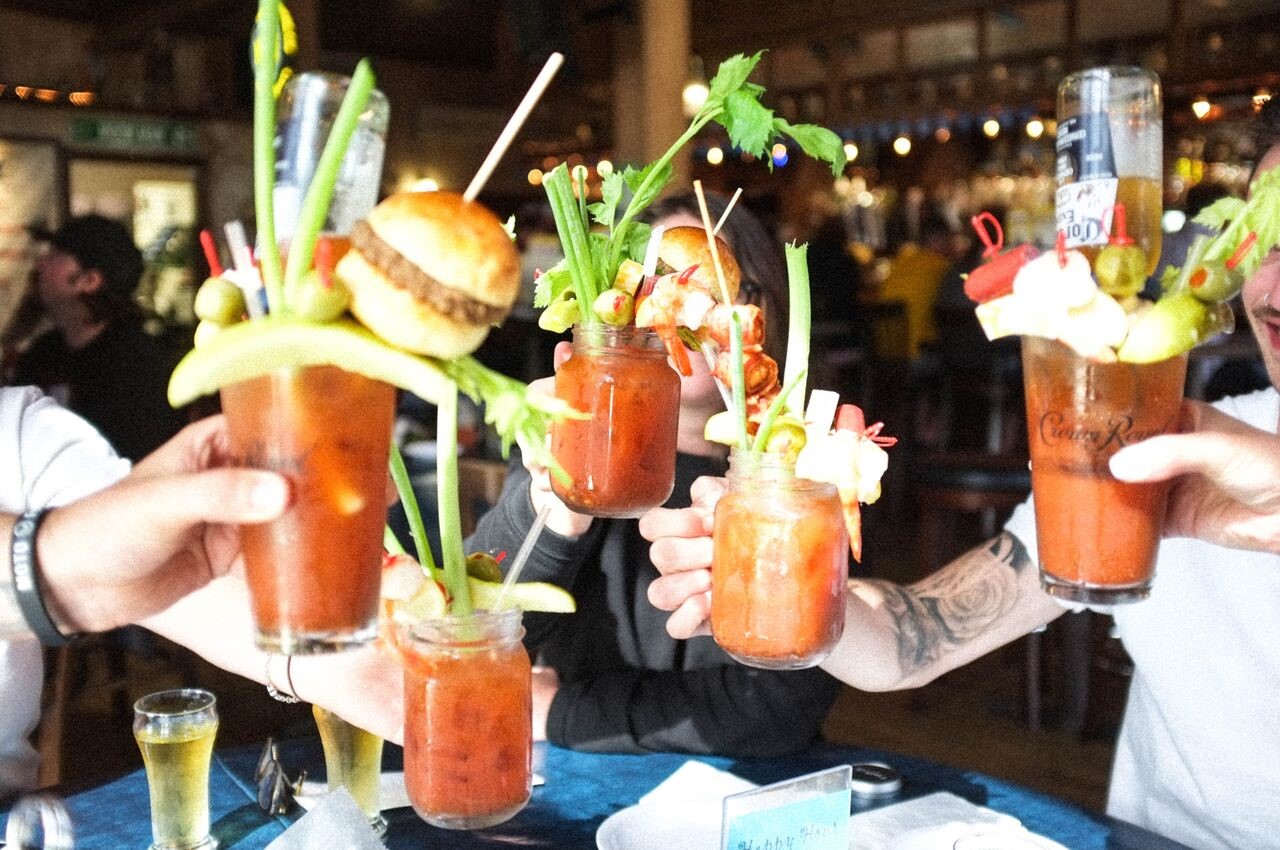 On Sunday, we packed up our gear at 5am and hopped on the ferry that took us across Lake Michigan. The ferry was full of motorcycles. The boat isn’t very big and the lake is massive, so sometimes the ferry gets a little wavy (and by wavy I mean you can’t even stand up out of your chair). Each motorcycle had 10 ratchet straps holding it down and with 6 foot wave swells, Harley alarms were going off like crazy and the bike owners couldn’t even stand up on the upper deck to walk down to turn their bikes off.

The storm chilled out and we were able to ride the next 8 hours straight back to Canada in sun shine. Our crew had 5 bikes, all brand new Harleys straight off the lot, so we cruised like no other. My bike had 6 speakers, cruise control and a seat that made me forget I rode from sun up to sun down that day. 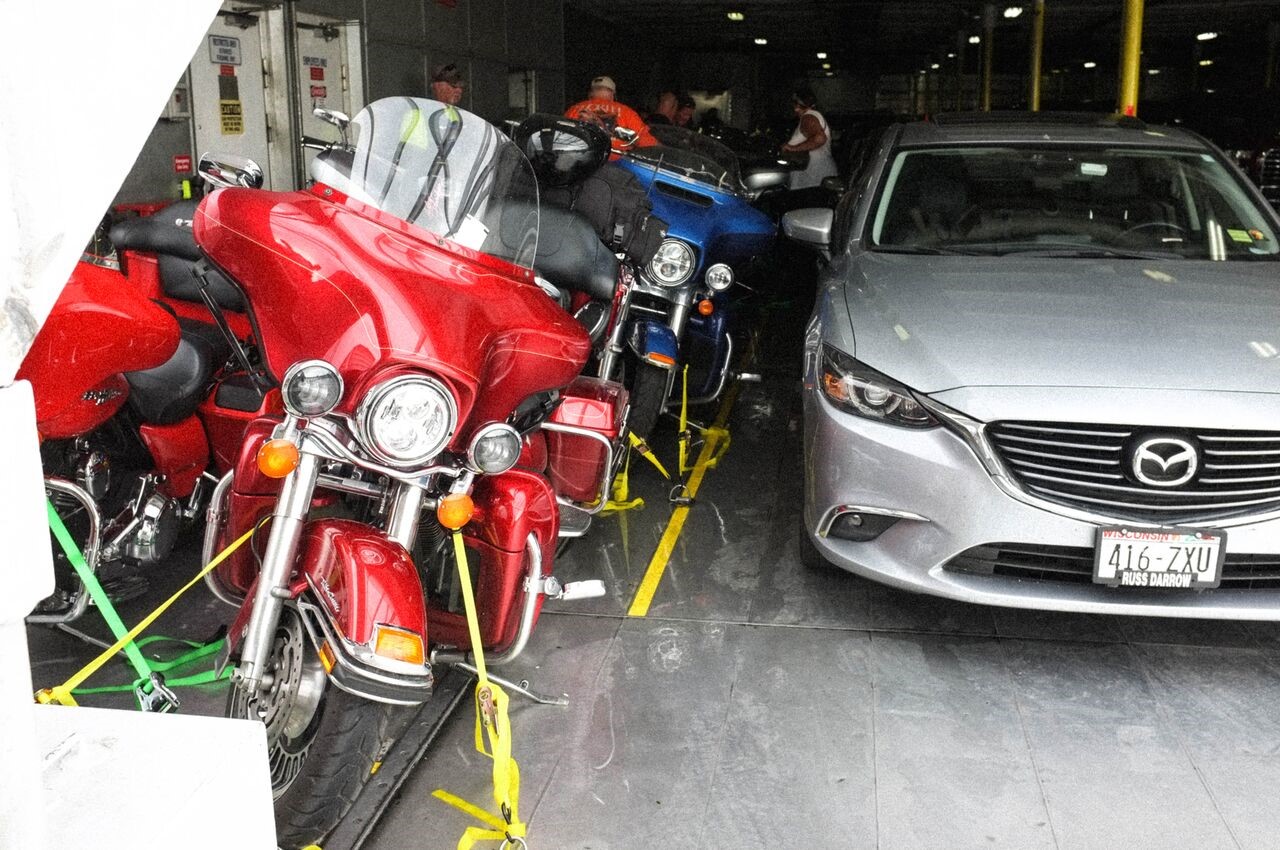 All the bikes strapped down on the 2.5 hour ferry from Milwaukee to Michigan 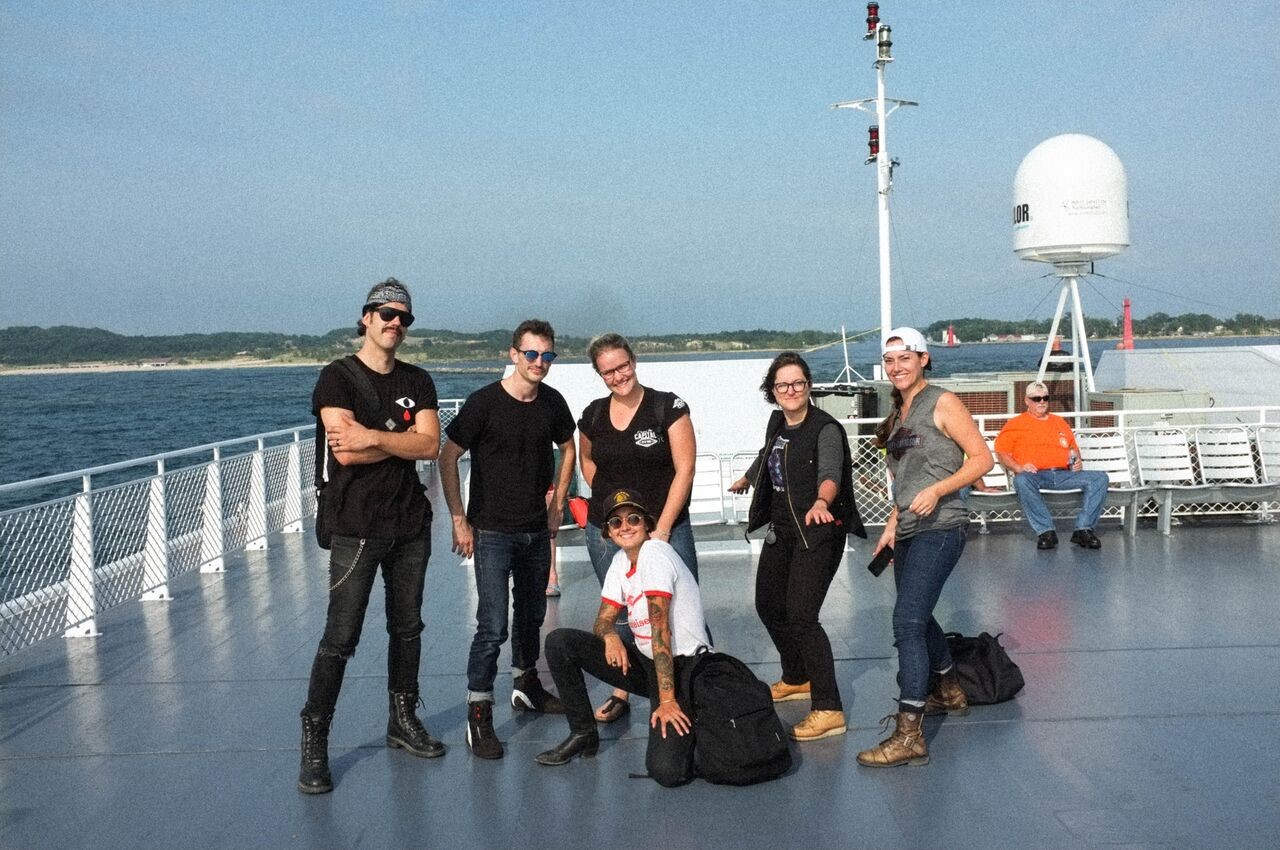 The Harley Canada crew, right before the great gerry storm of 2018 on Lake Michigan

This was my first experience at one of Harley Davidson’s anniversary parties, but now that I know what’s up with them, I will be sure to be back for the 120th. To be so immersed into a brand that has shaped so many parts of my life was really cool. Harley Davidson knows how to party so if you’re reading this, and also love HD, I will see you in 5 years! 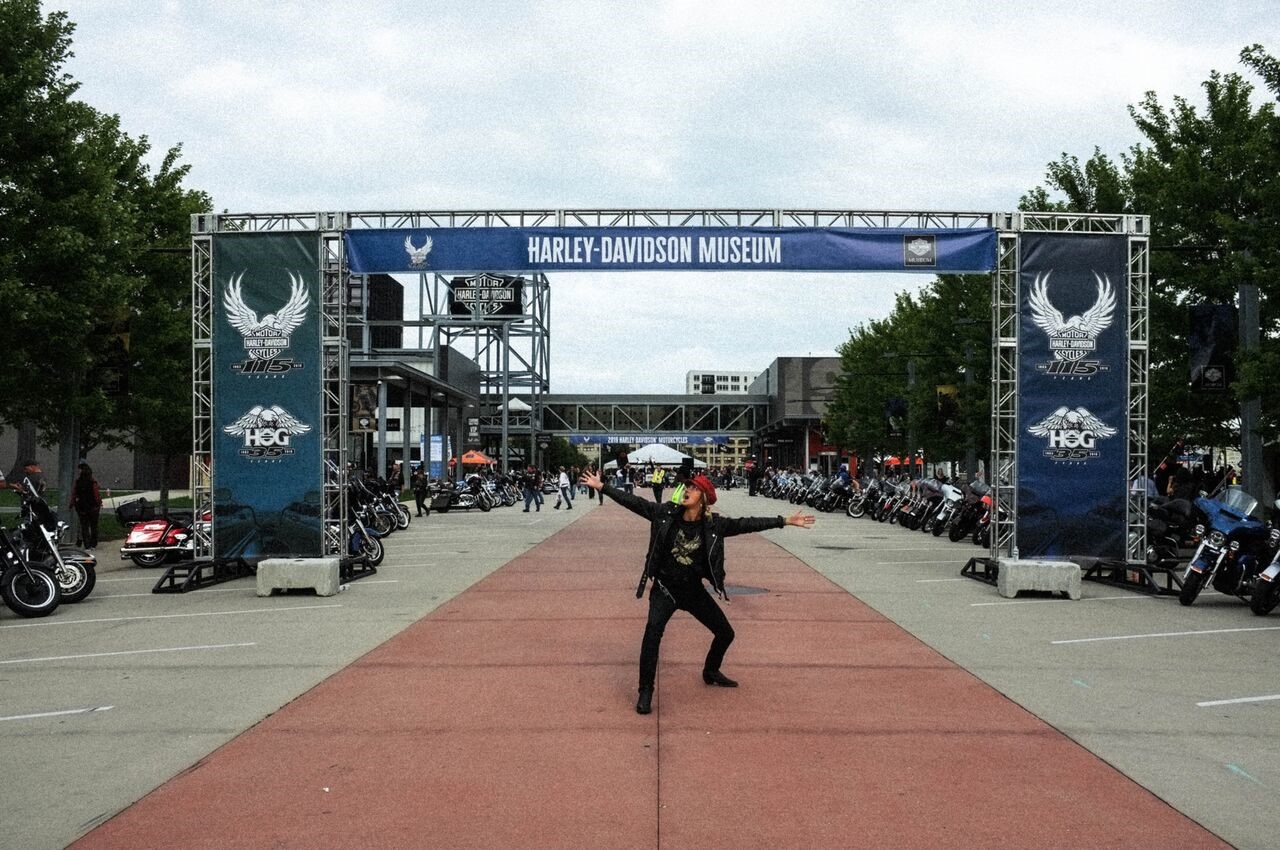 Me, the most hyper person in Milwaukee