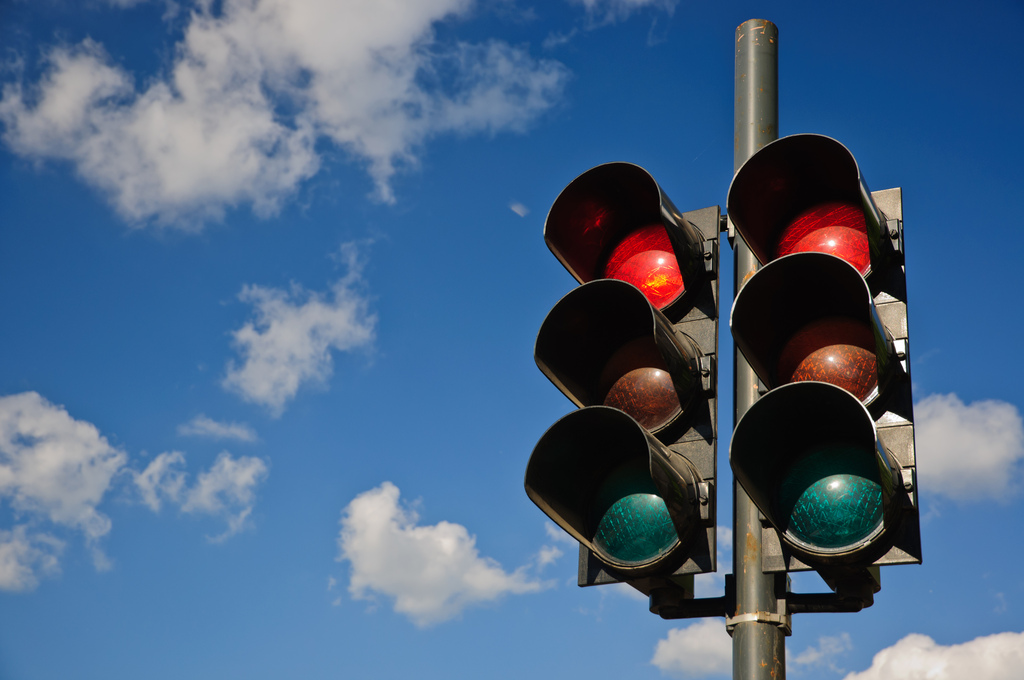 If you’ve ever spent time driving in Portland, Oregon, you know that there is a crazy high ratio of bicycles to cars year round. When the rain starts to break and the sun peeks through the clouds, suddenly there are motorcycles everywhere, too. This rings true for most of Oregon.

Every two wheel driven individual, whether motorized or not, knows the frustration of sitting at a red light as it goes through cycle after cycle, letting every vehicle go through but you. While often times bicyclists are known to just run the red lights in Oregon, Police have cracked down on the habit. Motorcycles are often too light or narrow to trigger the light sensors (if any) that are installed at intersections. This creates a huge problem for commuters who are stuck sitting at lesser trafficked intersections for extended periods of time, or are forced to take an alternate route involving right turns to avoid a potential ticket.

Emily George of See See Motor Coffee Co gives us her opinion of the new law, “ I don’t think there will be a decrease in commute time for motorcyclists, considering most of the wait time does not involve sitting at red lights, rather idling in traffic and being unable to split lanes. That is where the real laws should be re-evaluated. I believe most experienced motorcyclist have a pretty sound judgement of what is considered safe and unsafe upon proceeding through a red light. However, the new law should be thoroughly covered during the Team Oregon rider training. My biggest concern in the implementation of this law would be vehicles mindlessly following the motorcyclist through red lights, believing the person is going through a green, but hopefully a push in awareness would eliminated most mistakes.” She brings up a good point.

So, how did this law come to be? The proposal, sponsored by Sen. Chris Edwards, D-Eugene, is designed specifically to help motorcyclists who constantly find themselves at stop lights that don’t change. “Last spring, a bunch of motorcyclists approached me with the concept,” he said. “They told me how they would get stuck at lights that kept cycling through without turning green for them.” This can effect other cars parked behind motorcycles, away from the sub-pavement sensors, as well. “They’re faced with breaking the law by proceeding in common sense fashion or holding up traffic. Neither is a good choice for them.” So the Senator sprung to action and put together bill SB 533, which was unanimously approved by the Oregon Senate. Originally, the language was written to only apply to motorcyclists, however “I think the Bicycle Transportation Alliance lobbied to include bicyclists,” Edwards stated.

Specifically, SB 533 states that after one full light cycle, if the sensors do not trigger, you are allowed to proceed with caution through the intersection at a safe time. “Safe on red” laws like this are actually not a new concept, as 14 other states have already implemented such systems. Motorcyclists and bicyclists will still be held liable should there be a collision with another road user while proceeding through an intersection on red. For motorcyclists, the bill also applies to highway ramp meters.

OMRRA racer and trackday instructor Chris Herrin also agrees it’s great to see this bill helping motorcyclists. He thinks it’s about time laws are being implemented for the sake of motorcyclists in Oregon.

Active Oregon ABATE member Mike Friend notes that it will also make for safer riders. “I think it will be a good thing for motorcyclists. Sometimes it happens around here. More so in the extended cities, not as much in Portland- I haven’t had a problem with it. But when it happens, it is a real drag, so I am for it.  As for the bicyclists, I don’t like the fact they are mixing in with the cars and trucks, but they are there now… so if they are out there and can do it safely, I guess it is okay. They end up in the same situation as the motorcycle riders. That is, out there in an intersection alone with no protection- a sitting duck. I ride a big Harley, so it likely sets the sensors off with no problem. When you get down to the other types of motorcycles on the road that don’t weigh so much it’s much more of a challenge for them. The sportbikes, the light street bikes, scooters, and mopeds are more likely to be caught at these dangerous intersections.  As I had mentioned before, any of these type of vehicles are vulnerable to a rear-end collision when alone in an intersection. To suggest that one has to get off their machine and cross traffic lanes to press the pedestrian button to get the light to change, or make a turn across traffic lanes to get out of the situation is very dangerous. It is best to proceed with the left hand turn or straight through the intersection when traffic allows one to proceed safely.”

As for Senator Bill Hansen, R-Athena, “It just makes a lot of sense to keep traffic moving. We’re not breaking new ground here.”