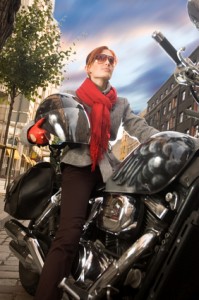 These days, you don’t see as many women on the back of motorcycles. More and more frequently, they are piloting their own machines. According to the latest survey by the Motorcycle Industry Council, the number of female riders has increased to about 7.2 million of the 27 million total operators. Around one in 10 motorcycle owners are now women.

The number of new motorcycle riders who are women is increasing, due in part to better equipment, stylish accessories like BikeBandit’s motorcycle jackets, and more opportunities to learn how to ride properly. Motorcycle clubs, which have historically been attended by beefy guys in black leather jackets, are now sprouting up with all-female memberships. The Women on Wheels is now an established group with a large following.

Female celebrities who have been spotted enjoying their time behind the handlebars include Cher, Joan Jett, Angelina Jolie, Pink, and Victoria Beckham, the Motorcycles and Women website pointed out. Chae An, a popular sportswoman, and actress Lauren Hutton are also fans of motorcycles. In fact, Hutton is the first vice-president of the Guggenheim Museum Motorcycle Club. Watching these women and others like them riding motorcycles is helping to inspire and empower others to do the same.

The reasons why more and more women are climbing on board machines of their own varies, Jezebel noted. Some like the ability to get themselves from point A to point B on their own and the freedom that motorcycle riding allows them. Others like being part of motorcycle groups that band together to promote a social cause. The budget-friendly aspect of motorcycle riding is a practical reason that many women find them attractive—filling up your machine is way way cheaper than your average gas-guzzling SUV. And of course, hopping on a bike and heading on the open road is really fun.

No matter the type of motorcycle a gal wants to ride, the good news is that women no longer have to try to fit into accessories and clothing meant for guys. As the Huffington Post pointed out, it’s easier than ever for women to find bikes that fit their bodies, or get an existing ride modified. And for those who want to give riding a try but are not sure about how to go about it, many places are teaching motorcycle riding and safety courses geared towards women. In fact, women tend to be more interested in formal safety training than men, the Huffington Post article said. About 58 percent of women sign up for a course, compared to 44 percent of guys. The Harley-Davidson company even travels across the country offering safety tips and training geared towards women.

For those ladies that will be riding in Sturgis during the 2013 motorcycle rally, the Biker Belles Ride is the event for you.  Biker Belles was created by the Sturgis Buffalo Chip to raise awareness of the passion, diversity and spirit of women in motorcycling, to celebrate our role in shaping the culture, art and history of motorcycling and to use the event to raise funds for worthy local charities.